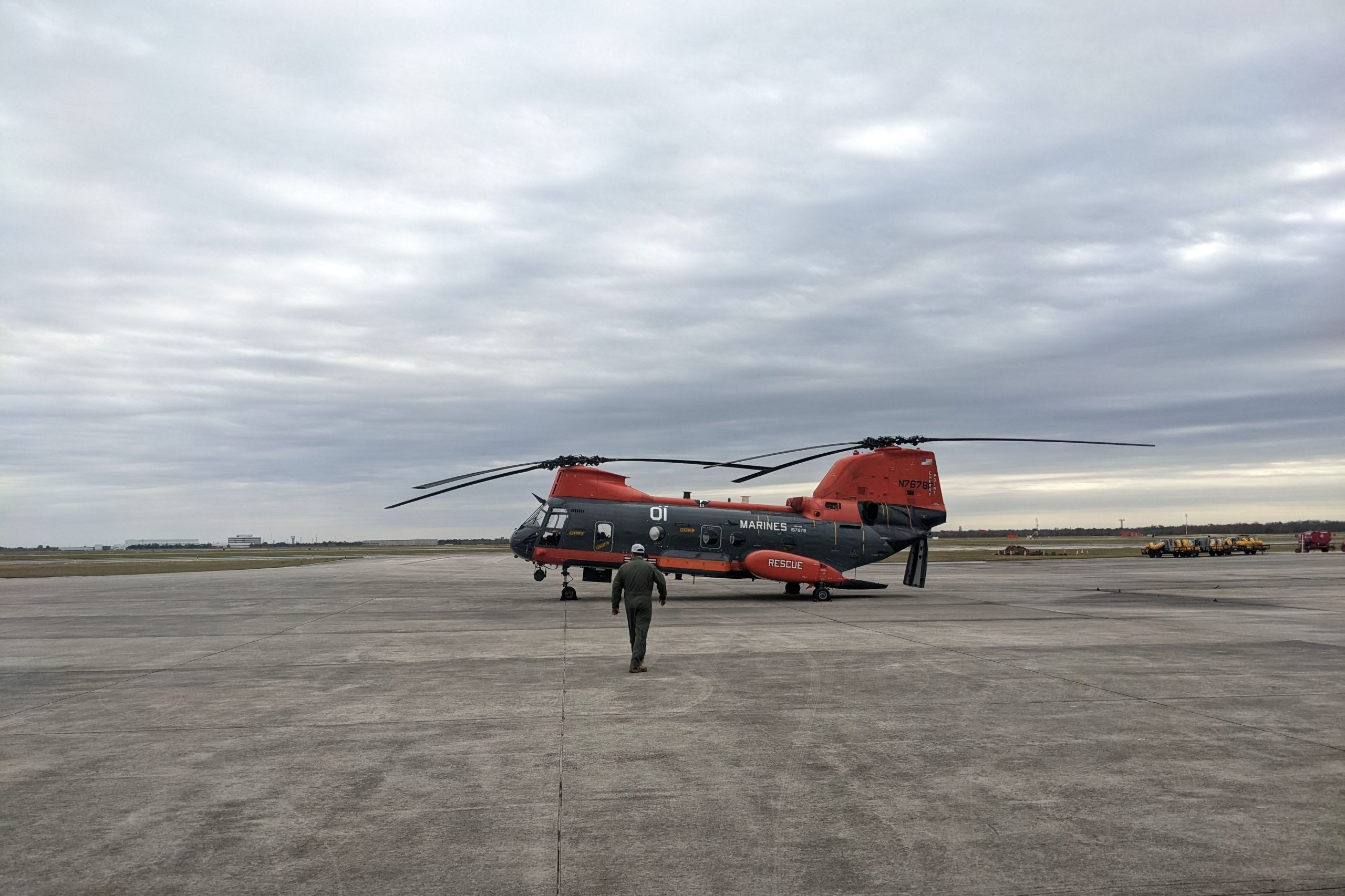 This past weekend, Oceanit Houston had the honor of applying AeroPel Nanocomposite Protective Layer (NPL) to the rotors of a retired Marine Corps H-46 Sea Knight helicopter. Oceanit’s NPL team is working with the National United States Armed Forces Museum, who own and maintain the helicopter, designated “Pedro 01,” to evaluate NPL’s ability to protect rotor surfaces from erosion damage.

Pedro 01 is a medium-lift tandem-rotor transport helicopter powered by twin turboshaft engines, originally developed by Vertol Aircraft Corporation. It is an HH-46E Search and Rescue (SAR) variant, referred to as a “Phrog,” and was manufactured by the Boeing Vertol Company in 1969. It was one of the last four HH-46E helicopters operated by the USMC from MCAS Cherry Point, North Carolina.

After retirement in September 2015, the Pedro 01 Sea Knight joined the civilian world via the National United States Armed Forces Museum (NUSAFM) located in Houston, Texas. It is currently the only airworthy and active HH-46E in the world equipped with all its original SAR gear.

In normal conditions, the leading edges of a helicopter’s rotors must be recoated with paint every 2-3 months as paint erodes, exposing the underlying rotor surface and risking premature corrosion damage. Oceanit is testing AeroPel NPL, developed to protect aircraft from corrosion, as a topcoat to significantly extend the lifespan of each rotor paint job.

In this pilot deployment, Oceanit serviced Pedro 01 by applying the typically-used black paint to all six rotor blades, adding a topcoat of AeroPel NPL to the three front rotor blades. Over the next few maintenance cycles, the rotors will be evaluated to determine whether the NPL-treated blades fare better than the untreated rear rotor blades.

In cooperation with Houston authorities, Pedro 01 remains active for SAR missions in the case of natural disasters around the Texas Gulf Coast region. The NUSAFM hopes that by using AeroPel NPL, maintenance cycles can be greatly extended, and the airworthiness of Pedro 01 can be maintained far into the future.

If you are ever in the Houston area, you can visit the National United States Armed Forces Museum and see Pedro 01. The helicopter is a beautiful example of the Sea Knight in the original SAR configuration.

Read more about the H-46 Sea Knight family of helicopters and how NUSAFM uses them today in this article by Chris Tonthat. For more information on AeroPel, visit aeropeltechnology.com.

Advanced MaterialsAerospaceCoatingsFunctional CoatingsNanotechnology
Previous IN THE NEWS | COP26, Sustainable Energy, and the Transition Away From Fossil Fuels
Next 2021: An Oceanit Action-Packed Year in Review