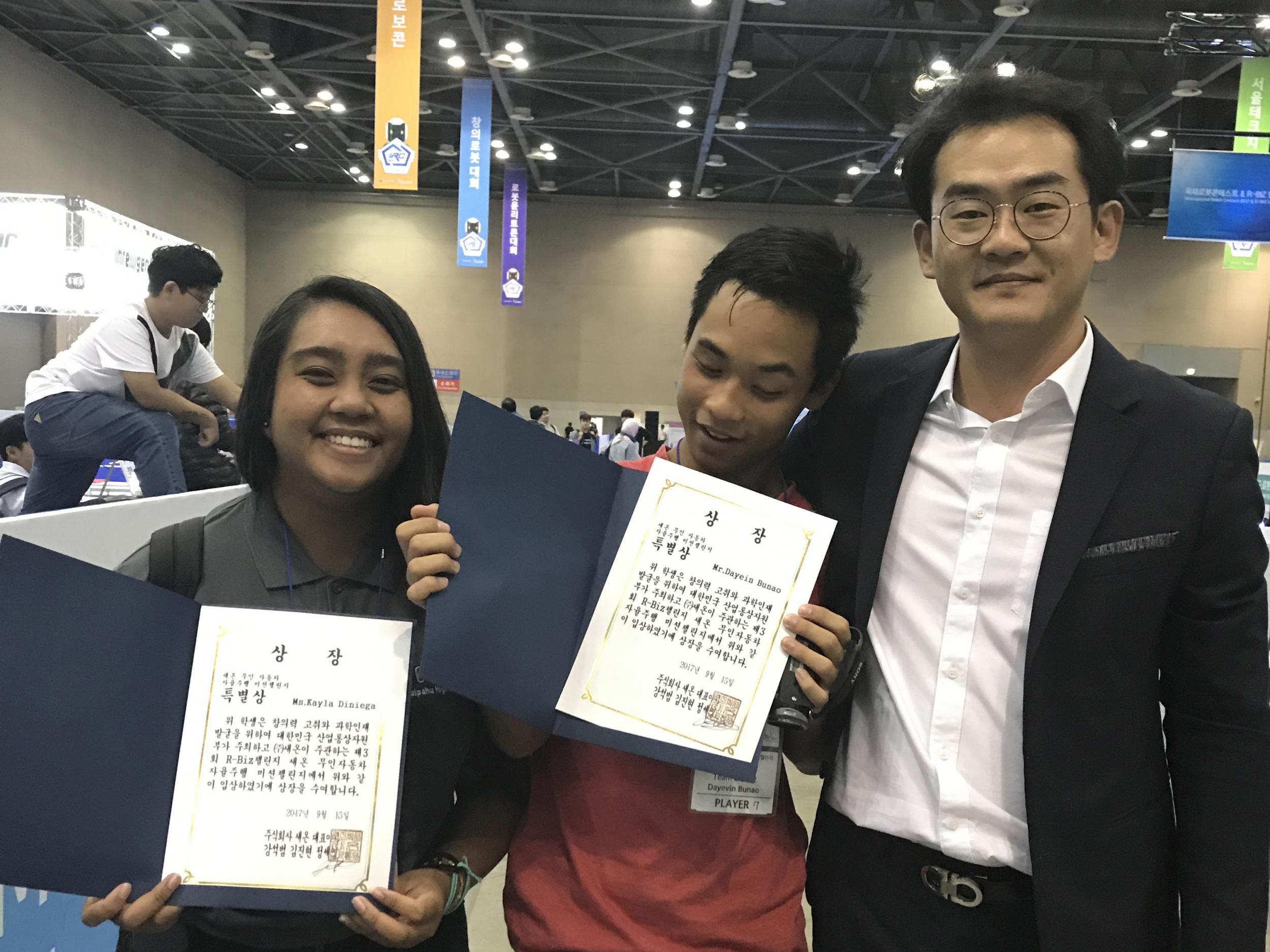 High schoolers, Dayevin Bunao and Kayla Diniega, started off as students studying coding through a series of classes that use “Altino” robotic cars as a platform to teach multiple coding languages such as Android, Arduino, and C++. From there, they became mentors, and in the case of Kayla, taught teachers coding as her summer job. Their enthusiasm and dedication to teaching teachers coding earned them an Oceanit-sponsored trip to South Korea in September for the 2017 Annual SAEON Autonomous Challenge, with additional help and support from those who donated to the Altino Coding Fundraiser.

“The trip to Seoul was a wonderful experience that broadened our perspective to new cultures and experiences,” says Dayevin. “The beautiful city was abundant with hidden treasures and local spots that made the trip all the more memorable.”

The first day were spent practicing for the competition. Kayla and Dayevin met college students from Korea and other countries, and spent their day training together. On day two, the team headed off to the competition. The magnificently designed KINTEX convention center was huge, spanning ten acres. “I’ll admit it was very intimidating,” says Cindy Takara, Waipahu teacher and the students’ chaperone. “We were the only English-speaking individuals, so I had to make out what they wanted us to do.”

The competition was broken up into three different categories: elementary, intermediate, and high school/college. Each contestant had to test their cars in accordance with competition objectives and winners were announced from every category.

“The challenge itself came with some unforeseen difficulties, such as the language barrier among foreign visitors”, says Dayevin. “Specifically, Kayla and I received a guide that was missing a few components to the most current software. That was difficult to communicate.” Five hours later, through work and perseverance, the team finished the race with honorable mentions.

One major takeaway from the trip was the Korean hospitality. The airline provided comfort amenities, such as slippers, toothbrush and paste, eye masks, and even BiBimBap as a food choice. The SAEON team warmly greeted the Hawaii team at the airport and was their personal guides in spite of their busy schedules. “Their hospitality was more welcoming than anywhere else I have been,” says Dayevin.

After the competition, one of the hosts also provided the team with a sightseeing tour, introducing them to good shopping and places to eat. “Our host took such great care of us throughout the whole trip,” Cindy says, “even as far as the airport; he walked us all the way to the gate.”

Another interesting takeaway was that meat is hard to find in South Korea: “By the end of the trip, we were all dying for meat! (We) came to find out it is a luxury in Korea,” says Cindy. “I was expecting to eat some Korean BBQ, but only in Hawaii. Bummer.”

The Altino project was originated by Oceanit’s Ian Kitajima to teach coding to every teacher to make coding accessible to 100% of students in Hawai’i via their homeroom teacher.