IN THE NEWS | Oceanit on Likeable Science, ThinkTech Hawai’i 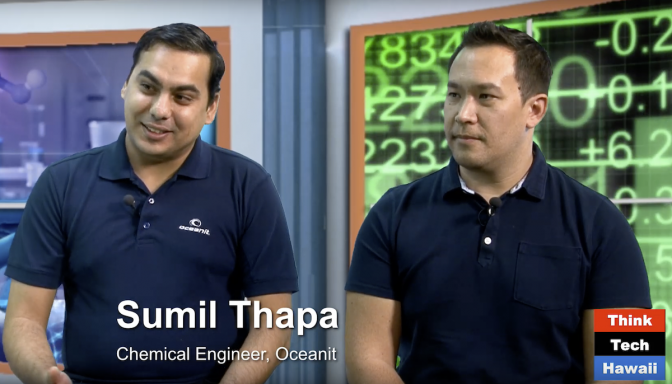 Oceanit’s focus on nanomaterials development started with a simple issue for the U.S. Navy – fouling on ship hulls creates drag, which in turns means burning more fuel to power a ship through the water.  What followed was a mind to market journey for our materials team, developing omniphobic nanocomposites which are now impacting a diverse set of industries and customers.

HeatX surface treatment is an advanced nanocomposite surface treatment for heat exchanger performance efficiency. HeatX is an omniphobic (oil & water repellant) coating that repels biofouling (both micro and macro-organism) growth on the tubular and metallic surfaces of all varieties of heat exchangers which are vulnerable to corrosion, pitting, and fouling.

Sumil and Jay spoke about the journey that HeatX went on, leading to an application of HeatX with Hawaiian Electric Company (HECO) back in 2017.  26+ months later and HeatX has outperformed HECO’s targets and helped them to skip five full maintenance cycles. While saving lots of money on downtime, cleaning, and replacement power generation for the offline heat exchanger, HeatX continues to have a great impact in ecologically by saving on heat transfer efficiency and pumping power consumption. At one point, the HeatX-treated heat exchanger was able to handle the load of two power-generation turbines when another unit failed.  Check out our full HECO case study by clicking here.

Advanced MaterialsFunctional CoatingsIn the NewsOil and GasS&T
Previous IN THE NEWS | Creators of Altino Robotic Cars, SAEON, Visit Oceanit in Honolulu
Next IN THE NEWS | Dr. Pat Sullivan, Titan of Technology