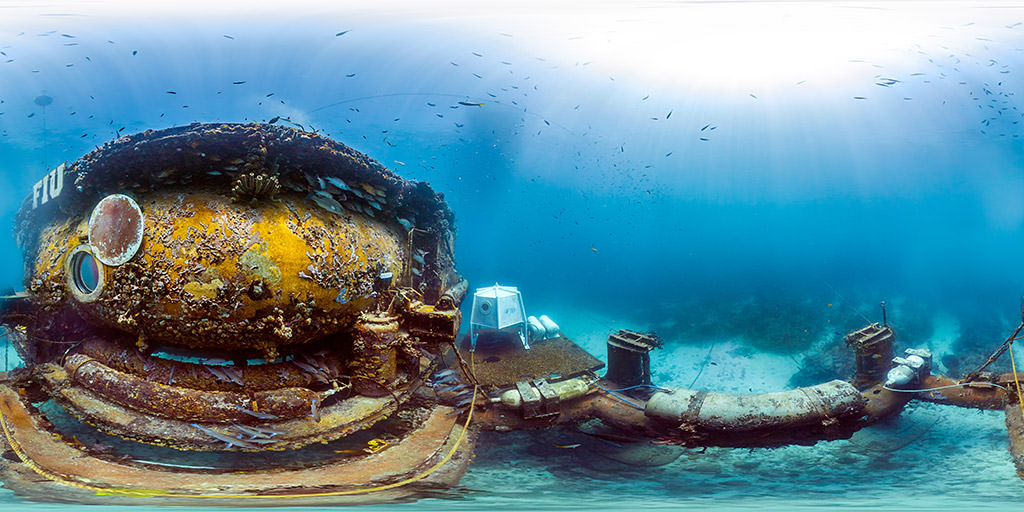 In 1960, nine years before Neil Armstrong set foot on the moon, Jacques Piccard and Don Walsh touched down on the bottom of the Marianas Trench. Just four years later, the first underwater habitat was lowered off the coast of Bermuda, and four ‘aquanauts’ spent 11 days living nearly 200 feet below the waves. As we entered the space race, our sights were also set on the dark depths of the ocean.

Space and the ocean have always inhabited similar places in humanity’s curiosity (note that Jules Verne wrote 20,000 Leagues Under the Sea and From the Earth to the Moon just five years apart), and by the mid-20th century, we finally had the tools to pursue both. As we all know, space eventually took over popular consciousness and continues to dominate our exploratory imaginations today, but below the surface, deep sea tech is also having a bit of a moment–and for very good reason.

The ocean covers 70% of planet Earth, yet scientists estimate that we’ve only explored 20% of it. And considering the state of the world right now (ahem, climate change), it’s probably important that we understand how human activity impacts the majority of the planet’s surface.

Oceane Boulais, software product manager at Oceanit and marine enthusiast, explains how we’ve managed to get to this point: “As the global climate above water changes at an unprecedented rate, so do our subsea climates. The only difference is that on land, we can directly see the destruction and calamity caused by droughts, wildfires, and flooding–it’s much harder to see the changes happening beneath the waves and at the bottom of our oceans. While some things are more readily visible, like the rapid bleaching and acidification of coral reef communities, other effects are more ephemeral; the holistic impacts of rising temperatures on our oceans is beyond our current understanding.”

But, science is pretty cool, and human ingenuity is even cooler. We have the capacity to increase our understanding of the ocean exponentially. We just need to decide to do it. “We have sensors today that can detect the surface temperature of Mars,” says Oceane, “What if we were to take that kind of innovative approach to understanding our deep-sea ecosystems? The mysterious blue blanket that covers 70% of our planet could re-enter our imaginations–and eventually our national and global priorities.”

Fortunately, we’re currently seeing a swell of interest in the ocean that could turn the tide on our ignorance and allow us to cast a wider net in our climate saving efforts. But enough with the shallow jokes–here are five initiatives angling to take our aquatic understanding to new depths.

Though perhaps less famous than their celestial counterparts, aquanauts still take to the ocean floor today, spending days at a time below the ocean’s surface, studying the surrounding marine ecosystem from the Aquarius Reef Base off Key Largo in the Florida Keys National Marine Sanctuary. Aquarius Reef Base is the only offshore underwater laboratory still in operation, though there are some hoping to change that.

When it comes to manned missions, having an underwater habitat like Aquarius can really accelerate research collection by cutting out the “commute.” In 2014, a team of six (one of whom was Fabian Cousteau, grandson of oceanographer and filmmaker Jacques Cousteau) spent 31 days conducting research from Aquarius. At the end, they estimated that the data the team collected was equivalent to two years’ worth of surface dive data.

On the other end of the exploration spectrum sits Terradepth. Think of Terradepth like an Uber for deep-ocean data gathering and delivery. It isn’t easy to study the deep ocean. Just reaching those depths requires a lot of time and money, making it impossible for many researchers to even think about wanting to study the deep sea. Terradepth is hoping to solve this problem by building a fleet of autonomous submarines capable of collecting data and offering their data collection services to the unfortunate deep sea researchers without autonomous subs of their own. Ocean exploration for the masses!

By removing the largest barrier to entry, more researchers will be able to study the deep ocean, and we’ll all be better off for it! Terradepth is still in its infancy, but they’ve raised $8 million in seed funds, and results from their Phase 1 trials of prototype submersibles completed earlier this year are looking good.

Pause for a moment to consider the vastness of the ocean. The ocean covers 70% of the Earth’s surface. It holds 320 million cubic miles of water, is home to 99% of all life on Earth, and hides trenches that are miles deep. If you want a visualization, watch this video from TED.

Basically, the ocean is big. And studying enough of it to really understand what’s going on beneath the waves is almost unfathomable. Or so it would be without artificial intelligence. AI makes it possible to collect and process more data in a few minutes than a team of researchers could in several months or years. But you can’t just give a computer a bunch of videos of reefs and say, “now do something with this.” Like humans, an AI algorithm needs to learn what something is before it can figure out how to identify it.

This is where FathomNet comes in. FathomNet is an open-source aquatic life image database that researchers can use to train their AI algorithms. It’s community-driven, and anyone can sign up to submit and verify photos for their database as well as use images for research. And although they’re starting by focusing on marine animals, the eventual goal is to include basically anything you can find in the ocean–including things like debris. 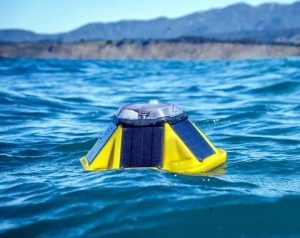 Okay, all of this learning new stuff about the ocean is cool, but what about the climate impacts that we already know about–are we doing anything about those? Well, I’m glad you asked. One of the most visible marine impacts of global warming is coral bleaching and declining reef health, which is largely due to increased ocean temperatures. And despite how clear this connection is, monitoring water temperatures around reefs isn’t very efficient–especially the reefs not in shallow waters.

Launched last year, Aqualink aims to bring temperature monitoring into the 21st century by deploying a global network of real-time ocean floor temperature monitoring buoys. While traditional deep-sea sensors are left to collect data for months or years at a time before that information is retrieved, Aqualink’s buoy system allows monitors to connect to satellites to transmit data in real-time, which could greatly expedite research. And, recognizing that protecting the ocean needs to be a global effort, Aqualink is giving these buoys away for free to anyone around the world looking to study their local aquatic ecosystems.

(They also have livestreams from a few of their stations–including this one in Keahole where you can sometimes hear parrot fish chomping on coral.)

As underwater data collection and analysis ramp up, we’ll also need to increase our capacity to transmit that information. Right now, cables are the most effective way to carry signals between land and ocean, and although they’re great at providing internet service, they’re expensive to place and upkeep. Plus, if we expect to see an increase in the number of projects that require data transmission, things could get crowded pretty quickly.

Acoustic communications are also used (think submarines with hydrophones), but data rates are extremely slow, hovering around 10 kb/s. This is because unlike electromagnetic waves in the “airwaves,” acoustic waves moving through water are literal changes in pressure and can only carry limited data at limited speeds.

To do the kind of research we’re hoping to do, we need an underwater communications system capable of delivering lots of information, very quickly, over long distances. Oceanit believes the answer is lasers. Oceanit’s ULTRA (which stands for Underwater Laser Telecommunications and Remote Access) uses tight-beam lasers to enable wideband, gigabit bandwidth communications in real-time. Because ULTRA uses lasers rather than waves (like acoustics), it’s unaffected by underwater noise environments (despite what many think, it’s loud underwater).

We’ve spent a lot of time and resources studying and exploring space, and our progress is an indication of just how much we can do when we put our minds to it. But now, it’s vitally important that we bring our eyes back down to Earth and turn our attention to the ocean–in fact, the wellbeing of mankind basically depends on it. Thankfully, the technological groundwork has largely been laid, we just need to want it enough.

But like, how can you not want to learn more when the ocean is full of so much interesting stuff??