Global Carbon Emissions Rise to 37.1 Gigatons, Here Is What We Can Do

Oceanit > Our Story > Global Carbon Emissions Rise to 37.1 Gigatons, Here Is What We Can Do 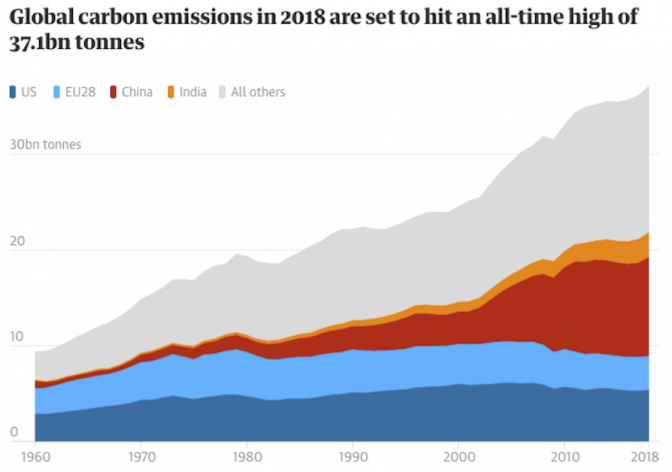 Global emissions alarms are sounding as we close out 2018. In a new report by the UN Global Carbon Project, worldwide carbon emissions, primarily driven by fossil fuels, will reach an all-time high of 31.7 gigatons in 2018. That is an increase of 2.7% from last year and sharply up from 2017 small increase and a plateau with 0% growth from 2014-2016.

The Global Carbon Project report states that the major driver of the 2018 increase was higher electricity demand worldwide, leading to more coal-burning – primarily by China and India as their economies grew and more oil used in transport. Emissions in China were up 4.7% and India by 6.3% year on year. However, almost all countries are contributing to the accelerating emission rates.

There are approximately 62,000 power plants in the world today according to the U.S. Energy Information Administration, the vast majority of which still burn fossil fuels like coal, petroleum, natural gas, or other materials to produce electric power.

The United States contributed a 2.5% increase to 2018 carbon emissions.

About 63% of U.S. net electricity generation comes from fossil fuels, with coal accounting for about 30% overall (and falling). While coal consumption in the U.S. is declining rapidly, worldwide coal use is experiencing what some have called a “renaissance”.

The result of this ‘rebirth’ is predicted to be a 2.7 degree Fahrenheit warming of Earth by 2040 at the current pace in  models from the Intergovernmental Panel on Climate Change, a United Nations scientific group. If humans continue to accelerate beyond 37.1 gigatons of carbon emissions per year, the timeline to reach that temperature would move ever-closer to 2030.

An estimated 42% of total carbon emissions are attributed to the energy sector.  While cleaner fuels and renewable technologies are a viable pathway to lowering emissions, electricity generation efficiency improvement is a direct and significant path available to us today.

In fact, efficiency improvements to fossil fuel electricity generation can have a greater impact today than all current U.S. solar and wind electricity production.

Generating electricity with fossil fuels is a fundamentally inefficient process that bleeds and wastes energy all along the generation cycle; from the boiler heat input all the way to the electrical output.  The 2014 weighted average efficiency of each fuel was: 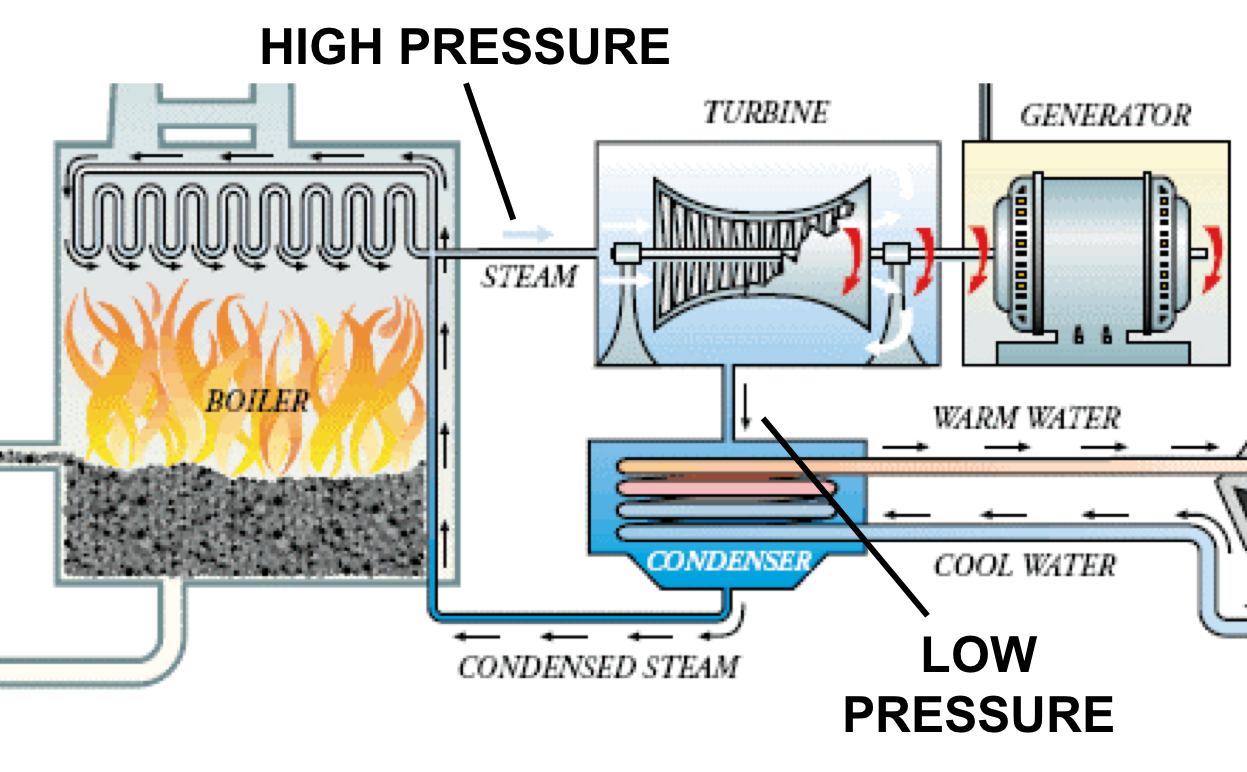 In the generation cycle, a power plant burns a fossil fuel to heat a boiler that produces steam, which then powers a turbine, that in turns spins the electrical generator. After powering the turbine, steam is recaptured in a condenser where cooling tubes convert steam back into water and feed it back to the boiler to start the cycle over again.

Condensers are responsible for over half of the efficiency loss in this typical generation cycle. By increasing the efficiency of condensers, we can generate more electricity with significantly less fuel burned.

Oceanit believes that nanotechnology holds the key and can improve the electricity generation cycle efficiency by 2.5%, or more.

The cycle efficiency gain is made possible by improving the steam condensation process in condensers. Using a nano-material surface treatment, surfaces can be modified to promote something called ‘dropwise’ condensation. In short, dropwise means more condensation, faster. This increase directly offsets the 50%+ efficiency loss that condensers are responsible for in the cycle – and ultimately, less fuel is burned.

By altering the surface characteristics of the metal tubes in a condenser, HeatX Plus can improve generation cycle efficiency to the tune of 144 million fewer tons of emissions in the US annually.

Examined on a global scale, the energy sector is responsible for approximately 13.3 gigatons of carbon emissions released into our atmosphere each year. The sector is by far the largest single segment of greenhouse gas production.

A 2.5% efficiency gain in electricity production with HeatX Plus could reduce total fuel burn by 8.2%.

The UN’s Global Carbon Budget was produced by 76 scientists from 57 research institutions, in 15 countries. They concluded that while renewable energy grew rapidly in the past few years, it’s still not enough to offset the increased use of fossil fuel. HeatX Plus could be the solution for today that scales our emissions enough to allow renewables to catch-up to our never-ending appetite for electricity.