Oceanit > Our Story > Grafix: When it’s Vandalism, Not Street Art 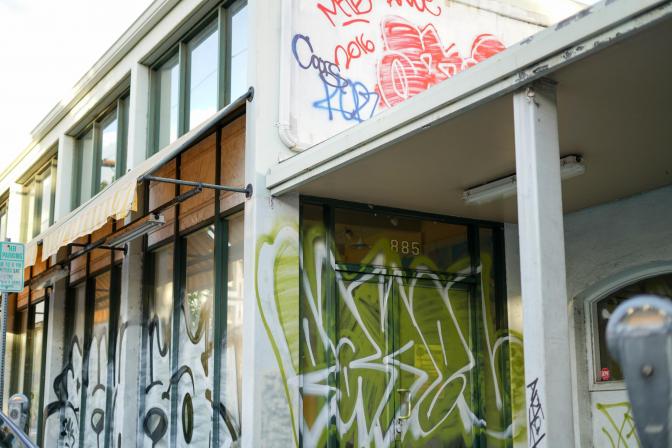 Street art has become increasingly popular within communities in recent years. In just the last decade, names such as Banksy and Shepard Fairey have become world renown in today’s pop culture, giving positive recognition to the term “graffiti” and welcoming it as a regenerated form of art within urban communities.

Street art has become increasingly popular within communities in recent years. In just the last decade, names such as Banksy and Shepard Fairey have become world renown in today’s pop culture, giving positive recognition to the term “graffiti” and welcoming it as a regenerated form of art within urban communities. However, though this movement encourages destigmatization, street art has also become rather complicated between law officials. In many ways, street art is still considered to be vandalism, and cleaning up graffiti is extremely costly. Every year, millions of tax-paying dollars are spent towards cleanup to repair public and private property. And despite the popularity of graffiti as an art form, there are still many graffiti that cause public disturbances, from small annoying eyesores, to offensive displays of hate.

To mediate this problem, engineers at Oceanit have created Grafix™, a super durable coating that resists the permanent paint properties found in graffiti spray. Grafix has been tested on both porous and nonporous materials, so its application secures any wall, sign, and other textured materials. It works as a defensive shield, allowing graffiti paint to easily scrub off, saving the city from purchasing costs by eliminating the need for removal supplies, and creating a quicker call to action in getting rid of unwarranted paint.

Grafix also improves the environment, reducing the need for paints and chemical removers, which cause adverse effects to the environment, especially when used over and over again. Paints could also peel if applied too often at the same spot, and are less aesthetically pleasing, commonly developing “patchwork” colors that are not identical to the original paint. Chemical removals are highly effective, but if applied improperly, could also cause more harm than good by damaging the original paint.

Ironically, part of the reason why street art is so highly regarded is because graffiti is not meant to be permanent. But in the growth of its popularity, this effect upon cities and taxpayers must also be addressed. Using Grafix could potentially eliminate costs from purchasing supplies. Additionally, as current popular removal systems are harmful to the environment, Grafix could be a more sustainable method to paint removal, as well as provide a better long term solution by creating a system that requires less maintenance and less supplies. Who knows? Maybe Grafix could open up the market to other open spaces within restaurants and stores, who may seasonally update their wall art at a cost efficient price. Artists themselves could also use Grafix in their own house as means to perfect their work.