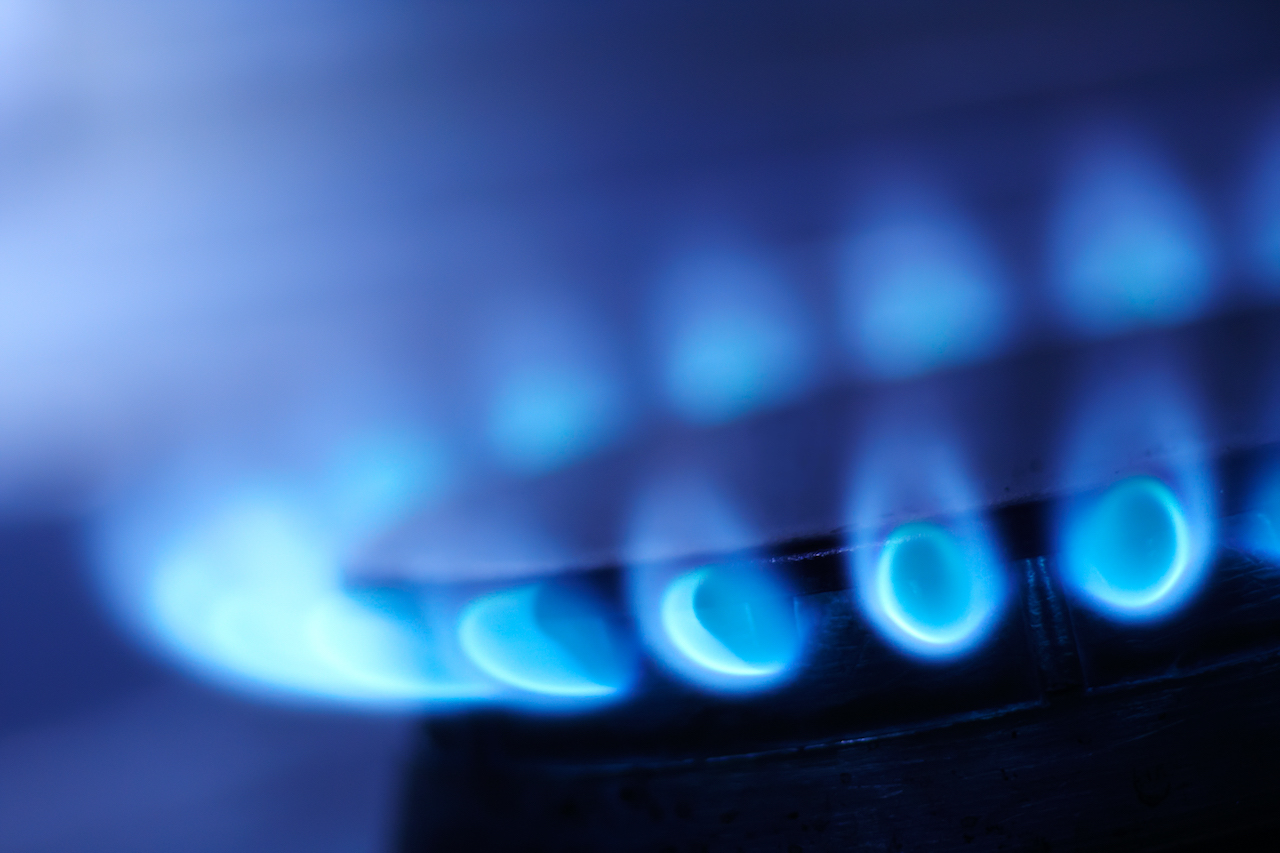 In October 2015, a massive natural gas leak was discovered in Aliso Canyon, California. In the months that followed, the leak, known as the Porter Ranch gas leak, would be widely reported as the single worst natural gas leak in United States history in terms of environmental impact. 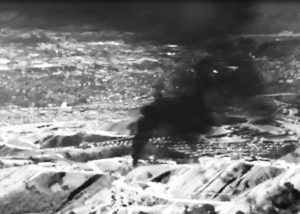 An infrared image of the natural gas leak at Porter Ranch, 2015

An estimated 100,000 metric tons of methane leaked into the atmosphere, and almost 3,000 households were displaced. 36,000 victims have pending lawsuits due to ongoing health complications ranging from headaches, nausea, skin rashes, and severe nosebleeds to gastrointestinal or respiratory problems and rare forms of cancer.

The Aliso Canyon natural gas storage facility taps a reservoir of an estimated 85 billion cubic feet of natural gas serving the Los Angeles basin. It serves more than 11 million customers and 17 natural gas power plants in a region where 90% of residents rely on natural gas for heating and hot water.

After investigations, it was determined that this leak — the biggest natural gas leak in U.S. history – was caused by an exceedingly small problem: Microbiologically–Influenced Corrosion or ‘MIC.’

MIC is caused by the presence of microorganisms that contribute to the rapid degradation of metals and alloys exposed to soil, water, hydrocarbons, and so on. The Aliso Canyon leak was directly caused by a rupture due to microbial corrosion — microbes literally eating away solid metal casing until the natural gas began spilling out into the environment.

One way to understand the power of these microbes is by comparing them to those that live in our mouths. Left unchecked, bacteria in our mouths form the sticky film known as plaque and create acid from the sugars and carbohydrates we eat. When this acid sits for too long, it begins to eat away at the enamel that protects our teeth.

Between brushing and dentist cleanings, we have several methods to maintain our teeth and dislodge all that bacteria each day. However, in industrial gas storage and pipeline systems, it’s significantly harder to maintain their metallic surfaces, and left to their own devices, the highly resistant and adaptable bacteria colonies can propagate rapidly. And just like in our mouths, when biofouling forms on system surfaces and is left for too long, the microbes get to work eating away.

From residential gas lines to country-spanning pipelines, MIC has been the direct cause of numerous other natural gas leaks and catastrophic corrosion failures around the U.S. and the world, with the associated damages and impacts costing billions of dollars each year.

Natural gas is a flawed energy source, but it is better than many other options. While it isn’t renewable, it burns more cleanly than other fossil fuels, has lower emissions, and doesn’t produce ash or particulates like coal and diesel. Opinions run the gamut on natural gas and the cleanest ways to use it, but one thing that is certain: The United States currently relies heavily on natural gas, even if it is a temporary energy source that bridges society to more renewable sources.

Another example of pipeline failure from MIC occurred in 2006 in Prudhoe Bay, Alaska. In this instance, the fossil fuel leaked was oil. Internal pipeline corrosion was found to have been caused by a type of microbe called sulfate-reducing bacteria. An almond-sized hole opened up in the pipeline, causing over 267,000 gallons of oil to spill out.

The hole was just .25 inches across, yet it forced 17 miles of pipeline to be decommissioned and replaced at a cost of around $450 million. Adding to that total was $275+ million in civil penalties, fines, and clean-up costs. Still, the impact of this leak pales in comparison to Aliso Canyon, California.

For several years, Oceanit has been working with the U.S. Department of Energy (DOE) to develop a variety of nanocomposite surface treatment technologies aimed at improving the efficiency, economics, and environmental impact of our country’s aging fossil fuel infrastructure.

Most recently, with support from the DOE’s Office of Fossil Energy’s National Energy Technology Laboratory (NETL), Oceanit has successfully demonstrated a new surface treatment that may offer a solution to the MIC problem facing the U.S.’s natural gas systems. Natural gas is a leading energy source for the United States, but the pipeline infrastructure required to process and deliver the gas is aging quickly. Oceanit’s DragX surface treatment could alleviate mounting stresses on this infrastructure while buying time for operators to refurbish and construct new pipelines.

DragX is a non-toxic, water-based nanocomposite surface treatment, which, when applied to metal surfaces, creates an ultra-slick surface and passivating layer. The omniphobic (water- and oil-repelling) surface mitigates corrosion and prevents biofouling from gaining a foothold on metallic surfaces.

Natural gas is predominantly made up of methane, a greenhouse gas 25 times more potent than carbon dioxide, and every leak is a devastating blow to the environment. In its support of Oceanit’s surface treatment initiatives, NETL is working towards solutions to significantly reduce the risk of slow, hard to detect methane leaks in natural gas pipelines. These initiatives could prevent catastrophic failure as well as enable the protection and inspection of pipelines with minimal venting of methane. This reduces the repair schedule while increasing monitoring of the pipelines and aids in stopping leaked or vented greenhouse gases from entering the atmosphere.

Independent lab testing has confirmed that Oceanit’s surface treatment approaches, such as DragX, can provide substantial protection against MIC, preventing both the bacteria colony attachment and penetration that cause corrosion. This means that pipelines coated with DragX are substantially less likely to suffer material loss and weakening of the metal. 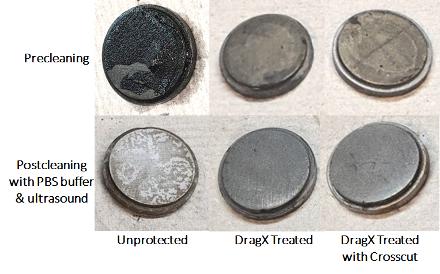 Images of test coupons before and after ultrasonic cleaning and PBS buffer rinsing. Uncoated coupons show significant bacteria colony growth and MIC, causing scarring and pitting of the substrate. DragX-coated coupons show minimal MIC and no signs of scarring after cleaning.

Sections of pipe treated with DragX were tested against unprotected sections in lab environments that purposely accelerated MIC. Results showed that DragX was 36 times better at preventing corrosion material loss compared to untreated samples. In other words, a pipe treated with DragX could take 36 years to corrode as much as an untreated pipe corrodes in just one year.

Laboratory testing demonstrated that MIC could eat through approximately 20% of the wall thickness of an untreated pipe in just 3 years. Under the same conditions, a DragX-treated pipe would reach that same 20% wall loss after 105 years of linear corrosion, far exceeding any reasonable expected lifetime of the underlying steel.

Oceanit has been commercially deploying its nano-surface treatment technologies for various protection applications in areas such as geothermal energy, oil and gas, desalination, chemicals, and manufacturing. Recently, Oceanit began working with Eni, an Italian energy company, to evaluate DragX for surface protection-related challenges associated with equipment, pipelines, and storage infrastructure.

At a global level, Eni is making an aggressive push to support technology development that can accelerate global energy transition to sustainable sources and fulfill environmental commitments. After performing operational feedback field testing of Oceanit’s surface treatment technologies on heat transfer surfaces and pipelines, Eni declared DragX to be extremely promising and noted that “Oceanit’s technologies could address surface protection and efficiency improvement of both brand new and existing infrastructure, alike.”

Eni’s evaluation of Oceanit’s technologies in their Alaska assets demonstrated significant differences between pipes coated with DragX and the control — the DragX-treated pipe section showed no formation of MIC, pitting, or damage whereas the untreated pipe showed evidence of corrosion during the same time frame.

DragX’s ability to prevent MIC has far-reaching implications for the safety, sustainability, and economics of natural gas and its underlying infrastructure.

The independent lab results show just how significant the effects of Oceanit’s treatments are in arresting the spread of MIC — and demonstrate the huge potential of DragX as a preventative measure against these deteriorating conditions within the country’s natural gas infrastructure.

Mitigating MIC with DragX would make industrial systems far safer, protecting structural integrity and delivering massive impacts relating to both economics and health. In California alone, an estimated $1 billion could have been saved, and 36,000 residents in and around Aliso Canyon may have been spared the health impacts of leaked natural gas.

DragX can be applied directly to aging natural gas infrastructure, increasing the reliability of pipelines in order to meet increased capacity and energy demands across the nation. In doing so, DragX allows us safely operate our current infrastructure while we transition to more carbon-neutral energy sources.