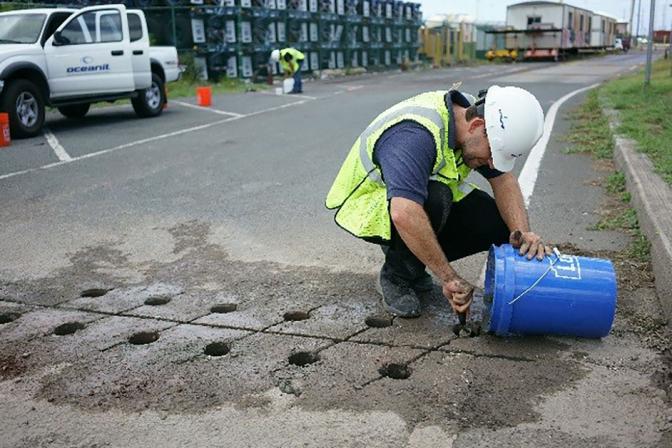 After years of wear and tear, potholes in our roads are one of the most noticeable signs of infrastructure damage. Whether they are along the highway or in residential areas, potholes not only damage vehicles, but are expensive to repair. According to the American Association of State Highway and Transportation Officials (AASHTO), a class 9 truck can weigh up to 80,000 pounds, causing damage equivalent to 26,000 cars. At 100,000 pounds, the damage incurred is the same as 70,500 cars and increases exponentially as the weight of the truck escalates. Because of road damage and safety factors associated with overweight vehicles, the Federal Highway Administration’s (FHWA) Offices of Infrastructure and Highway Policy Information has recognized up to date weigh-in-motion (WIM) technologies as “critical to have.”

The WIM system was developed to weigh heavy vehicles while in motion to identify which trucks are overweight. Oceanit’s NANITE™ technology is now being tested as an alternative to current WIM technologies. NANITE™ is a smart concrete using nanotechnology to turn an ordinary block of concrete into a sensor. A road paved with NANITE™ can seamlessly provide valuable information about the weight, speed, and volume of vehicles to enforcement officers and maintenance crews. NANITE™ is also superior to current WIM technologies because it is more accurate, reliable, and less expensive to maintain.

Since 2015, Oceanit has been working with the Hawai’i Department of Transportation and the FHWA to test the NANITE™ weigh-in-motion sensor system for eventual integration into the Middle Street pavement modernization project. Because it is a street highly trafficked by heavy trucks and busses, Middle Street will become Hawai’i’s first smart road, the first of many on Oahu with fully integrated WIM systems to monitor overweight buses and trucks.

In the future, WIM may also play a big role in the Internet of Things (IoT), an interconnected network of technologies communicating with each other. Smart roads may be the future of roads that “speak” to you with the data collected being used to provide traffic updates and notifications about available parking spaces.