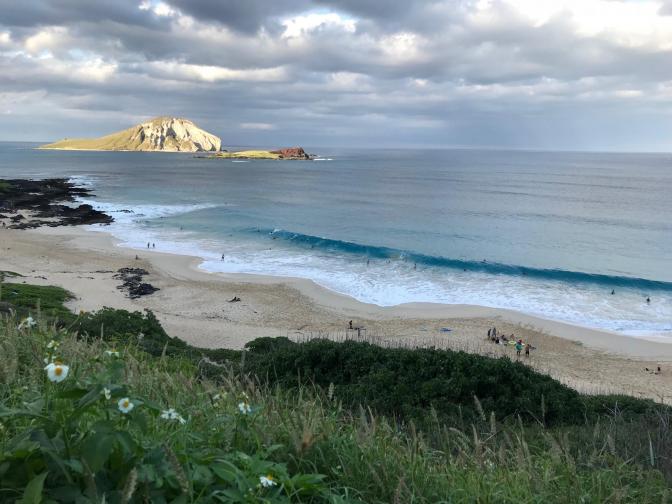 The critical issues of sea level rise and climate change – and the various symptoms of these shifts – are affecting us worldwide and at home in Hawai’i. While a large eco-centric movement has been gaining momentum for some time, the concept of accelerating climate change came to the forefront as a worldwide concern in the ‘90s. As the National Research Council stated in ‘America’s Climate Choices, 2011’, “Some scientific conclusions have been so thoroughly examined and tested, and supported by so many independent observations and results, that their likelihood of being found wrong is vanishingly small.”

The National Academy of Science declared, “such conclusions are then regarded as settled facts. This is the case for the conclusions that the Earth system is warming and that much of this warming is very likely due to human activities… strong evidence on climate change underscores the need for actions to reduce emissions and begin adapting to impacts.”[1]

“As engineers, we are here to find the most appropriate solution to the problem. So we must constantly innovate.”

In 2018, Hawaii’s local government adopted a strong stance to protect our islands from effects that residents have already been experiencing. Local communities are unique in that mayors are enacting coastal guidelines as official policy, which is a forward-thinking move that many other coastal communities are not doing as of yet.

While many local and state-level governments do not have official positions on the effects of global warming, sea level rise, and their effects on their respective areas, the state of Hawai’i has officially released the Hawai’i Sea Level Rise Vulnerability and Adaptation Report. This report outlines in no uncertain terms the projected and measurable consequences of sea level rise for our state. The report posits that seas will rise by over one meter by the end of this century. Even more recent official projections have stated that this may even be a low estimate.[2]

Hawai’i, and any island community, has clear and unique challenges in facing rising sea levels and in dealing with adverse disaster conditions. Due to our unique location, temperature- and ocean-dependent weather patterns, and isolation from mainland resources, Hawai’i is particularly vulnerable to the repercussions of the evolving global environment.

Infrastructure here has been developed to work with the ocean as it was several decades ago and many of our waterfront housing or fortifications, harbor facilities, sea walls, and beaches etc. are now degrading under today’s ocean conditions.

As a Hawai’i-founded organization, Oceanit understands both the cultural and engineering challenges these shifts pose to our islands. Our team is focused on mitigating coastal concerns for our islands responsibly. These solutions and thought processes can be extended to assist more coastal regions as well. We believe in working towards a sustainable future for Hawai’i, and the whole planet, through responsible and innovative engineering solutions.

“While we have time, we don’t have many hills to run to. This is happening, and that’s why we’re here.”

There are four key challenges to be expected from of sea level rise[3] – and Oceanit’s Resilient Sustainable Engineering (RiSE) team works directly to combat these issues:

So what can we do as both residents and engineers? Oceanit’s RiSE team is committed to enacting responsible engineering solutions to mitigate these adverse effects. We understand that over-engineering our natural environment isn’t the answer.

We deliver innovative, responsible, effective, and sustainable infrastructure to communities and ecosystems – solutions that are capable of surviving and functioning under chronic stress and recovering quickly from extreme events. We focus on four main concepts for mitigating rising sea levels and climate change, all of which are used in combination dependent on specific scenarios. 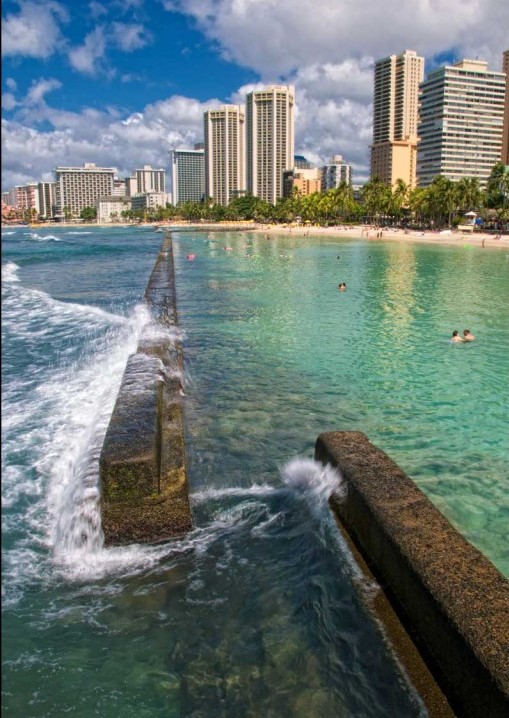 Armoring is one of the more straightforward models of protecting the Hawaiian Islands from rising waters, but is not always the right solution for our Aina (Land). Coastal armoring has become incredibly common in the continental United States, and includes things like sea walls, bulkheads (vertical walls that retain soil but provide little protection from waves) and revetments (sloping structures on banks and cliffs).

To that point, “fundamentally, there is an issue with the concept of building walls to stop flooding,” says Rachel Gittman, an environmental scientist and ecologist at East Carolina University. “We should not be thinking that we can stop every flood.”

Oceanit’s Dr. Mike Foley agrees that armoring is not a permanent solution at the current rate of sea level rise progression. “We can dedicate…planning and research to (armoring) in order to have more time to perfect moving out or retreating,” says Dr. Foley. Coastal armoring structures are not always appropriate for Hawai’i specifically as they alter the natural beauty of our islands and could fundamentally alter the way we enjoy certain coasts, beaches, and waterfronts.

Adapting and reclaiming land involves steps such as refilling eroded/lowered areas with additional sand or other material; to regain the land mass and/or rebuild upon diminishing ground. As an example, we are able to help with a process known as backfilling. Dr. Foley described this as “…in areas where the seawall has been undermined and the beach is starting to get sucked through, we can come in and bring more sand. We can fill in some of the pukas that have formed.”[4]

Adaptation methods are discussed as a more viable option when paired with strong worldwide actions to lower environmental damage, but without a strong and consistent commitment to these actions, land reclamation is a temporary fix. Reclamation could act as a stay to create additional time to plan and implement more permanent solutions.

Engineer Grant Tokumi notes that “Ancient Hawaiians were innovators, they modified the land as they understood it, so we can adjust and adapt as well.”

Moving out to sea is a concept most commonly seen in southeast Asia, and one that most closely works with the ocean instead of against or in spite of sea levels. Putting communities and infrastructures on top of the water is one seen in sci-fi films like Water World or in travel blogs and videos of areas like Thailand and Vietnam.

Moving out to sea would require flexible anchoring systems, in order to remain in place and to accommodate for any continuing sea level increase. Oceanit’s Dr. Dayan Vithanage is a proponent of this method, as he holds a belief that is popular in Hawai’i: “we think we own the land and can manipulate it, but the land owns us and allows us to be here.”

While Dr. Vithanage argues that moving out to sea is the most reasonable action in his opinion, he also holds a positive outlook on the time and resources still available to us. “Time is still on our side to plan… small houses and structures can be raised,” along with the creation of protected lagoons and levees that protect the shoreline while still maintaining some of Hawaii’s beach-based tourism. 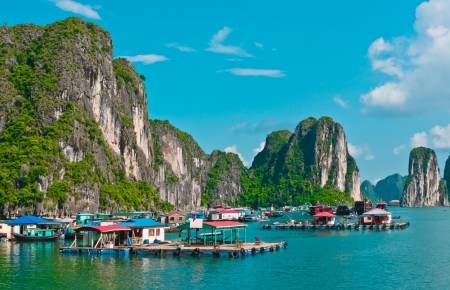 Oceanit engineer Grant Tokumi believes, “the history of the islands is clear… historically the only option we have is retreat [inland].” He noted that the shore is our first line of defense and believes in a concept of temporary coastline armoring to allow us to retreat over time and protect core infrastructure.

The option of retreating immediately is not a viable option for obvious reasons: rebuilding a complete infrastructure with an anticipated future shoreline in mind would never gain widespread acceptance from landowners and policy makers. However, the long-term nature of this option makes it a much more feasible course of action over time.

As Grant Tokumi assures, “this is not a 20 year happening that we need to get all done right away… this is a 200 year happening.” The true implementation of retreating means making conscious decisions from now on with an inward moving shoreline in mind: as buildings and roads naturally require repairs and replacements through age or damage, we need to begin the process of moving them further inland and making plans to condense infrastructure more centrally on the island.

Some recent additions to Hawaii’s infrastructure have taken these first steps- a contact from HART (a company related to the Oahu rail project) has disclosed that the rail system was planned not with the current coastline in mind, but with a future shoreline at approximately King/Beretania streets. Building new infrastructure or dedicating resources to repairing anything seaward of future shoreline projections should only be done with the long-term objective of moving inland in mind.

The scientific and engineering community as a whole is in constant discussion about the pragmatism and feasibility of each potential engineering solution to sea level rise. We believe that no one solution is the be-all end-all for any particular instance of location, and this is especially true for the islands of Hawai’i.

Oceanit agrees that the unique culture and ecology of Hawai’i creates some more intense issues than those of coastal communities in the continental United States and worldwide. Action for property owners on a smaller scale, including the use of industrial sandbags and back-filling under seawalls are currently the norm, while larger, long-term plans are being put together at a public policy level. We believe that ultimately larger-scale, regional or community solutions are a better approach when dealing with SLR and climate change.

Oceanit maintains a consistent, open dialogue both internally and in our community about the challenges presented by sea level rise. All of our scientists and engineers cross-pollinate their ideas to deliver innovations and solutions that will make a difference within Hawai’i. The consensus among our team is that every idea is worth listening to, incorporating, and evolving. No idea is off the table; when you bring together interdisciplinary innovators that live and work in Hawaii, the group effort will be beneficial to everyone on our island.

No single response is going to be the one solution appropriate for the entire state. Every coast on every island has different topography, different existing infrastructure, and different intrinsic value that will alter the approach that we take to protect and preserve the land that currently exists. Our intent and hope is that, in addition to evolving with our community, the ecological and engineering innovations that Oceanit implements will be used across the globe. We can help prove that Hawai’i is key in leading change and developing new technologies as an example to be followed.

The many symptoms of climate change are situations that Hawai’i must approach differently from the continental United States, a task that Oceanit has a long history of tackling and intends to continue in the future.

Civil EngineeringCoastal EngineeringEnvironmental EngineeringSustainability
Previous Education & Imagination | Summer 2018 Interns at Oceanit
Next Global Carbon Emissions Rise to 37.1 Gigatons, Here Is What We Can Do