Hawai‘i has to diversify—but diversify to what?

Oceanit > News > In the News > Hawai‘i has to diversify—but diversify to what? 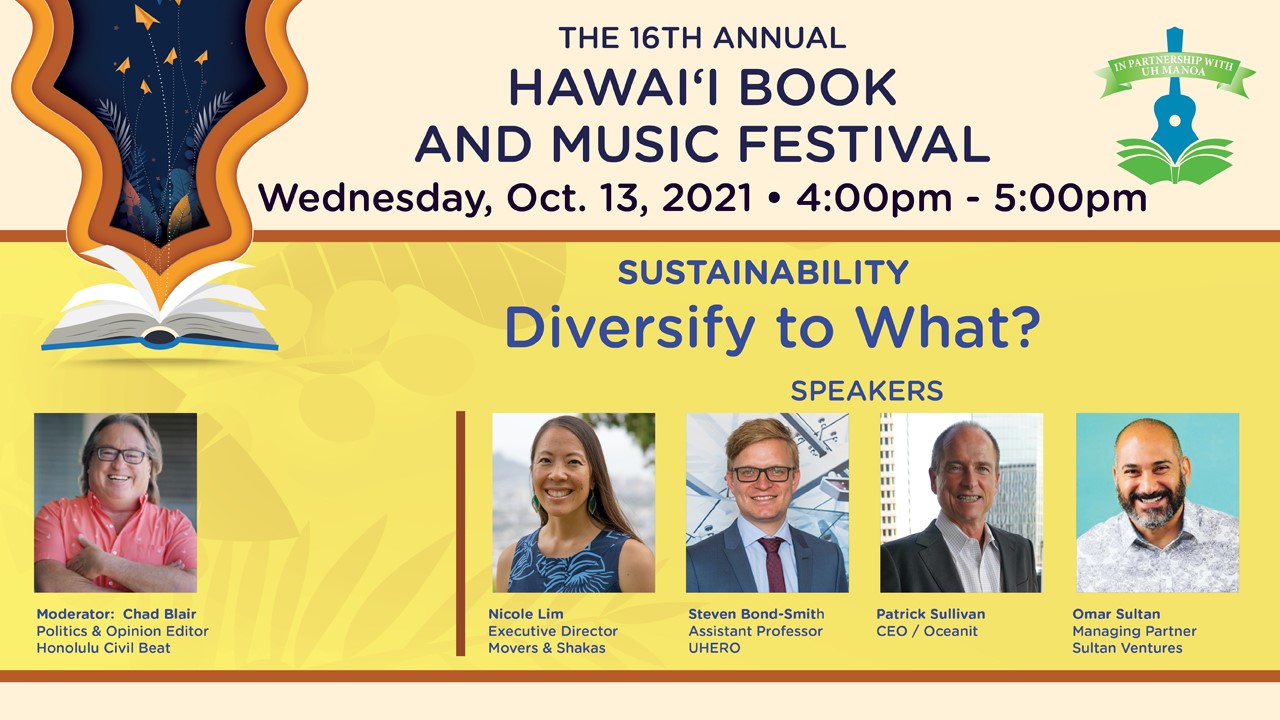 Dr. Sullivan was joined by fellow panelists Nicole Lim, Executive Director of Movers & Shakas, Dr. Steven Bond-Smith, Assistant Professor at University of Hawaii’s Economic Research Organization, and Omar Sultan, Managing Partner of Sultan Ventures, who all weighed in on the state of Hawaii’s economy and where we can go from here as we look towards a “Hawai’i 2.0”.

The pandemic brought to life many long-discussed, somewhat abstract issues, regarding Hawaii’s near singular focus on the tourism economy. Many businesses suffered when the bottom fell out of the tourism sector during the COVID-19 pandemic. No longer an esoteric economic concept, the economic reality of a singular reliance on tourism bared real-world consequences. In 2020, thousands of workers were furloughed or lost tourism-related jobs altogether, many have not yet found work at pre-pandemic levels.  Many businesses that depended on tourism disappeared forever. It begs the rhetoric question: Will this pain and suffering muster the political will and community support to actually change Hawaii’s future, or are we destined to repeat this economic insecurity in the future?

In Dr. Sullivan’s book, ‘Intellectual Anarchy’, the chapter titled Defeating Geography articulates one future outcome for Hawai’i – a future based on education and imagination. However, it requires a re-think of Hawaii’s self-imposed limitations of being in the middle of the sea. Whereas most in Hawai’i think of the world 50 years ago – only recently are people experiencing what has changed — with technologies like Zoom and online shopping/delivery. Dr. Sullivan argues that as we utilize key modern infrastructure – energy, broadband and transportation – the old geographic limitations to economic growth, particularly in knowledge-based industries like innovation and other creative endeavors, are relatively indifferent to geography. Moreover, Hawaii’s diverse people, inspiring environment, and engaging culture are the seeds to creative industries that can produced sustained economic growth well into the future, delivering high quality and well-paying jobs. Still, this will require Hawaii’s State elected officials create and adopt the right policies to enable economic growth.

Chad Blair addressed the energy factor with a question about Hawaii’s commitment to be on 100% renewable energy by 2045.  How realistic is it that Hawai’i will be using completely renewable energy sources by the target year? Dr. Sullivan responded that the technology isn’t the issue, it’s the political will power and the collective agreement to pursue this lofty goal that will be the harder part.

Hawai’i still burns coal and waste oil for the majority of its electricity in 2021. The centralized utility business model, one that was crafted over 100 years ago, hasn’t had a fundamental paradigm shift in decades. With renewable energy sources and technologies advancing rapidly, the main factor that could impact Hawaii’s ability to reach those goals will be the bureaucracy and the will of the people to enable change.

Dr. Sullivan’s Intellectual Anarchy: The Art of Disruptive Innovation is ultimately about how problems of the magnitude of energy, climate, and economic transformation demand radical new ideas and the collective will to put those ideas to the test.  Overturning existing industries, practices, and business models will be crucial in realizing both Hawaii’s energy goals and an economy 2.0 that does not hinge purely on tourism.

The diverse panel offered varying thoughts on where Hawai’i goes from here in business, technology, and health. They agreed that diversity is one of Hawaii’s greatest strengths and if we do have the will the evolve, our economy could easily surpass the tourism-driven one that is still struggling to recover in 2021.

You can watch the full “Diversify to What?” Hawai’i Book & Music Festival panel discussion here: https://www.facebook.com/HawaiiBookMusic/videos/865248314173312