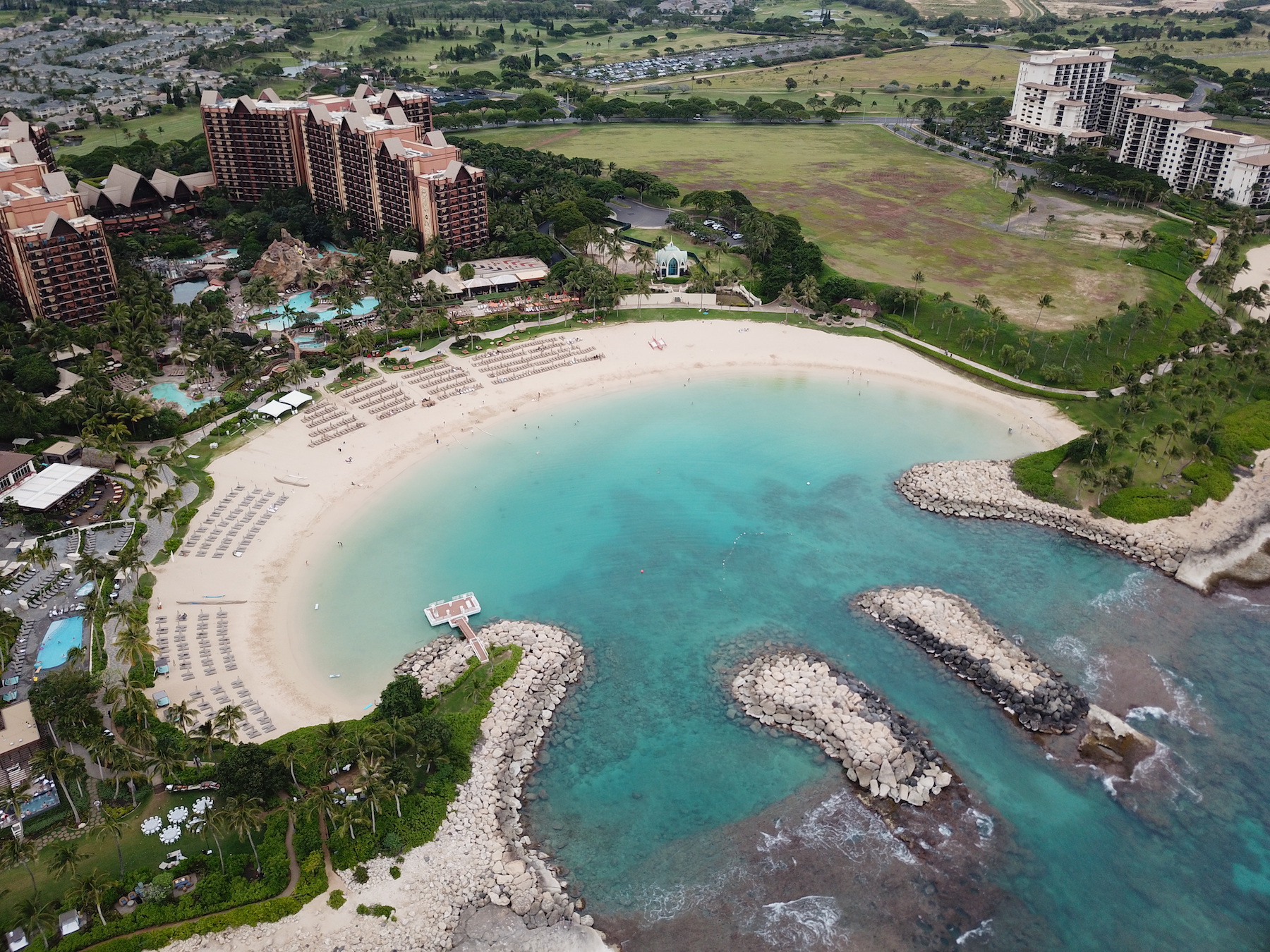 There has been much debate about durable and responsible coastal engineering and design. Many feel that the only solution to climate change-induced sea level rise is to move away from the coastlines. Coastal engineers hold a different view—durable solutions can be engineered and engineered responsibly for the environment.

These coastal solutions require periodic maintenance, as all environments utilized by society do, but if engineered with resilience and sustainability in mind, the solutions can be long-lasting and impactful for users and the ecosystems. The Ko Olina lagoons on Oahu’s west coast is an example of one such successful solution.

Coastal environments are complex and ever-changing. Waves, tides, erosion, and deposition continuously shape and reshape shorelines. As such, coastal development projects require expert understanding, as well as respect for natural processes, every step of the way. Resilient and sustainable coastal engineering is only possible if the environmental, hydraulic, and cultural aspects are understood and embraced from the project’s outset.

As Oceanit celebrates our 35th anniversary, and climate change-induced sea level rise is beginning to get the attention in investment that it demands, we look to one of Oceanit’s “first” projects that began in 1984, when soon-to-be founder, Dr. Pat Sullivan, and current RiSE (Resilient and Sustainable Engineering) director, Dr. Dayan Vithanage, worked on the now iconic Ko Olina lagoons. Almost 40 years later, the lagoons stand as an example of impactful coastal engineering that have stood the test of time and added to the community and ecosystems nearby. This project laid the foundations for Oceanit’s development as an environmentally-focused oceanic and coastal engineering firm and, later, as a sustainability-minded science and technology company.

Even in 1984, Dr. Sullivan and Dr. Vithanage both knew that only with careful planning and comprehensive environmental assessments could the lagoons withstand the complex coastal dynamics at play and safeguard the coastline development for future generations. It would take a balanced approach to integrating the possibilities offered by the marine environment with cultural, societal, and ecological demands.

This approach would eventually lead to the creation of Oceanit’s current Resilient and Sustainable Engineering team — also known as RiSE — who are dedicated to solving the most challenging environmental and coastal engineering problems with responsible solutions.

The Ko Olina Resort and its emblematic lagoons are now an integral part of Oahu’s leeward coast, but the landscape looked quite different not too long ago. The land that Ko Olina now stands on was once part of the sugar plantations owned by the Campbell family. Located on Oahu’s west shore, its shoreline was dominated by hard reef with occasional indented pockets of beach. And while the leeward side’s dry climate, absence of stream discharges, and dense, impervious soil create exceptionally good nearshore water quality, waves breaking on the hard reef produce strong currents making it unsafe to access the water.

Developers bought the land in the mid-1980s and quickly realized that in order to develop the land for use they needed a coastal engineering solution that would provide access to the water, create beaches for recreation, ensure clean water for swimming and ocean users, and protect the coastline from waves and other nearshore hazards. Ultimately, they decided to carve four shallow, resilient lagoons and enhance the beach with quality sand.

At that time, Oceanit RiSE Director, Dayan Vithanage, was a PhD candidate at the University of Hawaii studying under Professor Frans Gerritsen, who was the consultant for the design. As it happened, Dr. Gerritsen was on sabbatical for much of the time, leaving the design fully up to Dayan. With 20 years as an engineer under his belt, and fifteen as a coastal engineer, Dayan rose to the challenge using a novel approach to coastal engineering that balanced wave energy reduction and water circulation.

The location of the lagoons was decided based on the existing land features, beach access, and compatibility with the planned development. 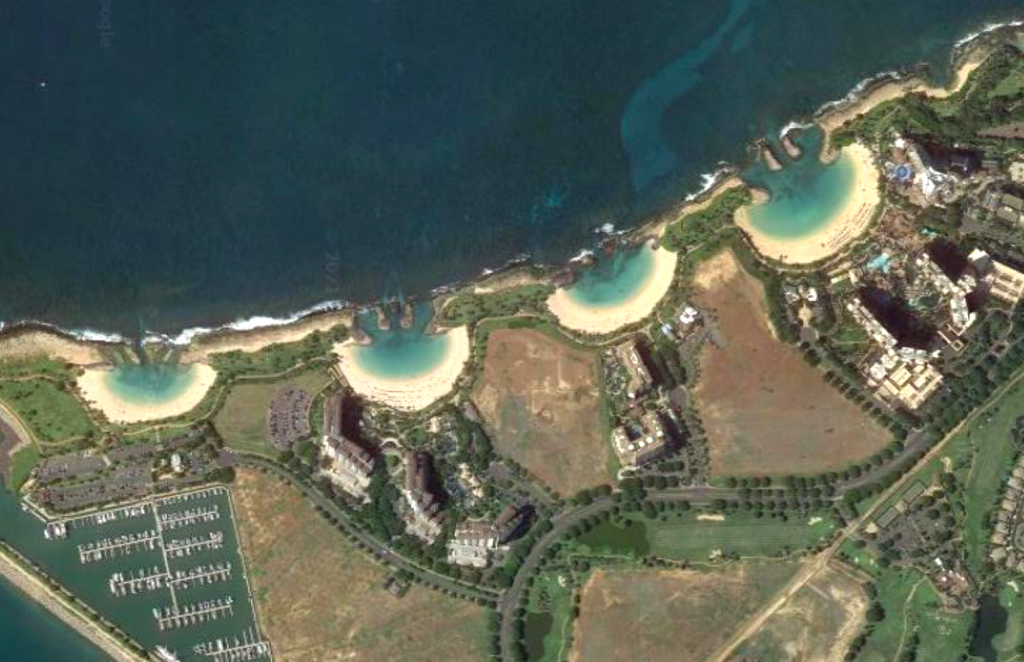 Image of the Ko Olina shoreline, 2020

Ko Olina’s lagoons were dug from the land, and so one of the main challenges of the project was shifting the land environment to an ocean one. The answer was not as simple as digging into the earth. Significant research and modeling had to be done to ensure that the lagoons would not erode away, sand would remain in place, and enough circulation would come through to maintain clean waters. And there was no cookie cutter solution—all four lagoons needed to be analyzed and designed uniquely, as all were different sizes and had slightly different orientations and sea fronts. This attention to detail and emphasis on environmental safety were critical to the project’s longevity and success.

In 1989, Dr. Sullivan and newly-founded Oceanit were hired to conduct environmental monitoring for the completed lagoons. As building the lagoons required significant environment change, there were concerns that particulates from the added sand would be sucked out and dirty the pristine waters outside, particularly in the aftermath of heavy rains. After setting out on boats, taking samples, and checking for any environmental threats, Pat’s small team reported that the design performed better than expected, and there was very little ecological impact.

As a further testament to the resilience of the design, over its 30+ year history, the lagoon system has been subject to large southern storms and the effects of category four hurricane, Iniki, with minimal damage and low maintenance costs. Putting in the effort to focus on environment-forward design early in the process has led to long-term positive outcomes. The lagoons—and the sustainability-minded approach taken to design them—have become a model for impactful engineering with limited environmental impact.

The Ko Olina lagoons, like Oceanit, are now approaching 40 years old and have withstood the test of time, a demonstration of the value of prioritizing resilient design. They have become an integral part of the leeward coastline, valued by visitors and locals alike for their calm, clean waters year-round. The success of the lagoons has also contributed to the economic evolution of the area, helping Ko Olina to transition after the agriculture industry faded in the area. This economic development led to more job creation, housing opportunities, and infrastructure development for local residents.

As climate change and rising sea levels further imperil shorelines around the world, coastal communities are not doomed to the choice of retreat or perish. Proper coastal design can protect shorelines, preserve beaches, and shield communities.