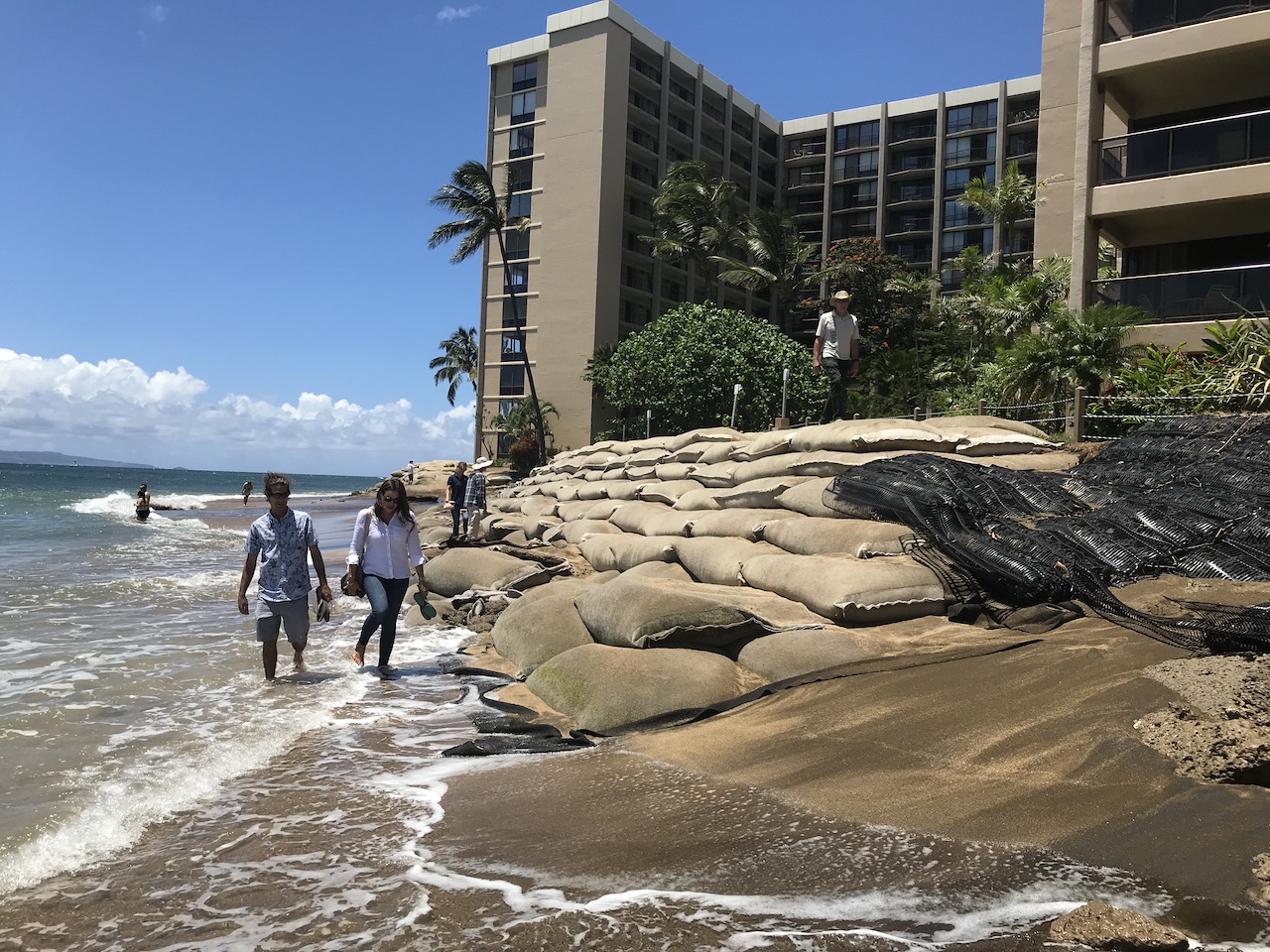 Since 1880, global sea levels have risen about 8 inches. Half of that has occurred in the last 30 years. Climate change is accelerating sea level rise (SLR), whether we’re ready to face it or not.

While it may have taken us a hot minute to accept this reality, SLR is now well understood and widely accepted. New construction projects now design for SLR projections looking 50 to 100 or more years into the future with the hope that these new structures will be safe for decades to come.

However, SLR threatens the existing coastal communities around the world, including many of our most populous regions—think Miami, Tokyo, Jakarta, Shanghai, or even New York. Luckily, engineers have an arsenal of tools to pull from as they evolve and innovate to protect our communities and ecosystems.

When facing rising sea levels and flooding, images of towering seawalls are likely the first thing that come to mind for most people—that’s armoring. Armoring is the use of physical structures to protect shorelines against SLR and erosion. These structures range from temporary sandbags meant to stabilize the beach to permanent seawalls and breakwaters, which aim to anchor the beach and dissipate wave energy.

Jakarta’s “Giant Sea Wall”—meant to counteract the compound effects of rising sea levels, worsening typhoons, and a sinking city—is an extreme example of this.

Unfortunately, armoring can also worsen erosion and create negative effects further along the same coast. Armoring structures that are meant to stabilize the shoreline often prevent sand from following its normal migration pattern, which can work to accelerate erosion. On top of that, the structures meant to deflect wave energy often end up channeling that energy towards unprotected areas further down the beach, creating a knock-on effect and simply passing the problem along. For these reasons and more, armoring is rarely a preferred method of shoreline protection, especially in the long-term.

Nourishment or replenishment involves bringing in sand to refill a beach to a prior sand level. For the best chances of success, the sand used must be of a similar grain size and quality to the beach’s existing sand so that it will work with the beach’s natural processes. Full, healthy beaches provide recreational and cultural benefits, and also help to mitigate natural disasters, acting as a buffer between the pounding surf and the homes, businesses, and infrastructure along the coast.

New Jersey is a good example of long-term commitment to beach nourishment (since 2002). The geography of New Jersey places it in the path of tropical storms, “nor’easters,” and hurricanes. In 2012, Hurricane Sandy swept through the region and demonstrated how valuable these nourishment projects are—communities with nourishment projects fared far better than those without.

However, erosion is a constant process and nourishment is not a one-time event. As erosion continues and as sea levels rise, re-nourishment will be required to maintain a beach front. Stabilizing structures such as groins may also be employed to lengthen a nourishment project’s lifespan.

Rather than trying to prevent the rising sea from reaching buildings and infrastructure, accommodation or adaptation calls for retrofitting existing infrastructure to accommodate SLR. This could involve things like floodproofing, moving critical infrastructure above flood elevations, and raising structures to clear flood levels.

In post-Katrina New Orleans, for example, all new and renovated homes must be elevated above a certain level. Although enforcement is still in progress (and that “certain level” keeps changing), those houses that have been raised have already withstood flooding in recent years.

As sea levels continue to rise, however, accommodation is not a one-time, long-term solution. What were once buildings elevated to withstand occasional flooding may turn into buildings suspended over the ocean.

Under a managed retreat strategy, SLR is allowed to occur without intervention, enabling an area to erode into the sea. Existing structures are relocated to higher ground. For many environmentalists, managed retreat is the preferred response as it allows nature to take its course.

Perhaps the most famous example of managed retreat can be seen in Cape Hatteras, North Carolina where a giant lighthouse was moved 2,900 feet inland. After decades of failed attempts to protect the lighthouse from encroaching seas, the 4,800-ton structure was carefully carted to higher ground in 1999.

However, managed retreat is an extremely complex process, requiring decades of planning and coordination across all sectors of society. For that reason, it is seen as a long-term goal rather than a short-term solution. Additionally, it is much easier to implement in areas with lower development and fewer types of buildings and infrastructure.

The Dutch have always had to engineer around the water—more than half the country is below sea level—and with SLR on the horizon, they’re leading the charge on floating development. Building upon a long history of houseboats, in 2009 the first contemporary floating community opened in Amsterdam and remains a success to this day.

While these types of structures can be engineered to endure constantly rising sea levels through the use of flexible anchoring systems, they are also incredibly vulnerable to impacts from severe weather events like hurricanes and tsunamis and are best suited for protected areas.

Protecting communities from rising sea levels is a complex issue with no single solution. Today, engineers use these tried-and-true techniques, but innovation never stops, and tomorrow we may employ technologies even better suited for our dire situation.

Coastal EngineeringEnvironmental Engineering
Previous How a Microscopic Problem Led to the Largest Gas Leak in US History
Next Friday Five: 5 Things to Know About a Hydrogen Fuel Future